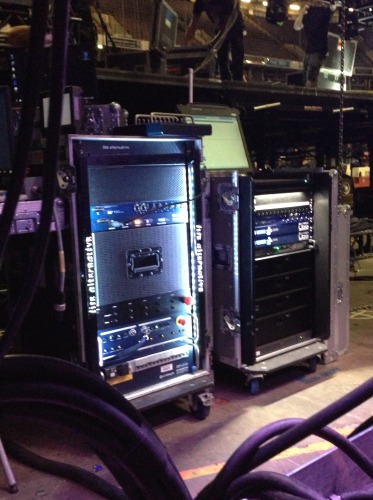 Kings of Leon have spent the last few months touring Europe and the US in preparation for the release of their 6th studio album Mechanical Bull, and Rigorous Technology have been with them every step of the way!

LD Paul Normandale specified a large Kinesys motion control package to move video screens during the show, this in turn necessitated the use of a mother grid to suspend the sub hung Kinesys hoists. With Lite Alternative supplying the Kinesys and mother grid, Tour Rigger Yose Lawson requested a LibraCELL package from RT to monitor loads not only on the mother grid but also on the individual moving screens.

In addition to the LibraCELLs, RT also supplied their new LibraSYSTEM rack. LibraSYSTEM brings much of the Libra product range together in one neatly packaged rack. With the inbuilt LibraWIFI Lawson was able to monitor loads on the rig from anywhere in the arena bowl using a rugged tablet, also supplied as part of the LibraSYSTEM package.

“The LibraSYSTEM rack really has been a revelation, its incredibly simple to use. Its been a talking point with Venue Riggers everywhere we’ve been.”
Yose Lawson, Rigging Machine

In another first, Motion Control Operator Mike Coryell networked his Kinesys Vector show file with the LibraSYSTEM rack via Ethernet. Using this method he was able to view loads digitally, and in real time in Vector. This allowed him to program Underload and Overload settings that would shut down any moves in the event of a problem.